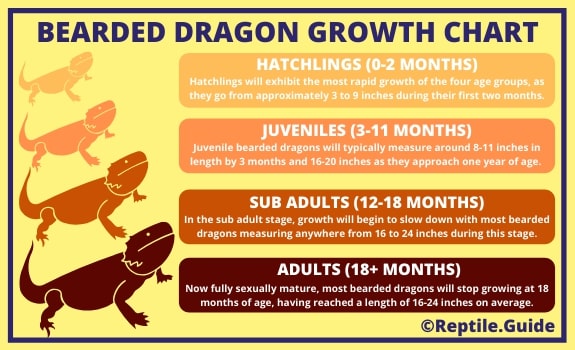 The bearded dragon’s scientific name is Pogona Vitticeps and they are medium sized lizards which are generally 12-24 inches in length from their head to the tip of their tail. There are many different bearded dragon colors which sometimes can help tell you what environment they came from.

Heads – The bearded dragon’s head is triangular shaped and contains rows of spikes that resemble thorns. Beneath their head, the bearded dragon will have rows of spiked scales which when puffed up resembles a beard. These scales can also change colors, turning darker, when breeding.

– The bearded dragon is supported by four stout legs and they have well-muscled flat bodies with a row of spikes that runs down each side of the abdomen. Their tail is generally half the length of their body, and unlike other lizards will not fall off and regenerate when threatened.

Bearded dragons are only naturally found in Australia’s desert regions. Generally they are found in the southeastern Northern Territory and the eastern half of South Australia. Their habitats included woodlands, savannahs, and deserts. It is not uncommon to find them basking in branches, on stumps, or rocks during the morning there.Bearded dragons were not introduced to the United States until the 1990’s. Since then they have dramatically increased in popularity and can be found in just about every major pet store.

How Big Do Bearded Dragons Get

The size and length of a bearded dragon depends on a couple of factors including:

Bearded Dragon Species Size
The most common bearded dragon species is the Pogona Vitticeps, so the chances are if you have a bearded dragon, is is this species. The chart below shows the max size based on the type of bearded dragon, but keep in mind that most dragons will not grow to be as big as their max size.

Bearded Dragon Size Based on Environment
Bearded dragons will only grow to the max size that their environment allows. This means if you put a young bearded dragon (that’s not finished growing) in a cage/tank that is too small , then they will not be able to grow to their full size.

Bearded Dragon Size Based on Sex
Like a majority of animals, the males are generally larger than females. So if your bearded dragon is a male your dragon will likely grow to be a larger dragon.

How to Tell How Old A Bearded Dragon Is

Sometimes you may get a bearded dragon and not know how old he/she is. Fortunately, there are a few tricks you can use to get a general estimate of how old a bearded dragon is.Measuring the Dragon’s Size
One quick way you can determine the age of a younger dragon is by measuring the bearded dragon from head to tail. Generally, if the length of the dragon represents the age (up to a certain point).

The below chart is the average size of over 50 bearded dragons during the first 12 months:

Determining Age by Sexual Maturity
Most bearded dragons will become sexually mature by 8-12 months of age. This is the point where you can differentiate the difference between males and females. So once you are able to distinguish a bearded dragon’s gender, you can assume that he/she is 8-12 months old.

Please keep in mind that there is no way you can accurately determine a bearded dragon’s age without contacting the breeder. Bearded dragons are like people, some develop faster/slower and are larger than others at different times of their life.

Bearded dragons are normally very healthy and hardy lizards. However, their lifespan depends on many factors. The chart below highlights different age ranges you can expect from your bearded dragon:

View More About This Leash

Bearded dragons were first introduced to the United States in the 1990’s and since then they have rapidly increased in popularity as pets. So why are bearded dragons loved as pets?Bearded dragons are usually gentle by nature and you rarely hear of an aggressive bearded dragon, especially towards humans. In fact, bearded dragons do not attack when threatened, instead they freeze, puff their throat, and may change colors.

They are easy to maintain as well. They don’t require walks and following a basic routine can be more than enough care for a bearded dragon to live into it’s teens. On top of this they enjoy being handled and stroked by people. They may squirm the first few times you hold them, but they will eventually recognize their master and will sit, relax, and perch on a person’s body.

Determining the Sex of Your Bearded Dragon

Methods NOT to Use:

More Accurate Ways to Determine A Bearded Dragon’s Sex
There are some more accurate ways to quickly determine your dragon’s sex without having to take him/her to a vet.

Most Accurate – The most accurate way to determine your bearded dragon’s sex (without going to a vet or doing anything too invasive) is by looking at their underside to see if you can recognize any gender specific body parts.

Female bearded dragons, on the other hand, will have a raised bump in the middle of their tail right above the vent. As mentioned earlier, nearly all bearded dragons appear to be female until they are matured, so if your bearded dragon is still fairly young, don’t be too certain that she’s a she just yet.

Below are some fun and interesting facts about the bearded dragon.Why Are they Called “Bearded” Dragons
Bearded dragons are called “bearded” because the spikes and scales they have around their head resembles a beard. They use this as a defense mechanism and will expand their throat whenever they feel threatened.

Is My Bearded Dragon Australian?
No, Australia made it illegal to export any wildlife in the 1960’s. It is believed that all the bearded dragons found outside of Australia were smuggled out of the country from the 1970’s to the early 1990’s. The general population of bearded dragons in the United States is so large now that it is unnecessary to import any more, since they can easily be bred.

Bearded Dragons Produce Venom
In 2005 the bearded dragon community was surprised to learn that researchers at Australia’s Melbourne University discovered that bearded dragons produce a mild venom. Since the venom is harmless to humans (and a majority of other animals), many researchers believe it was once a trait used by the lizard’s ancestors in the past when hunting.

Bearded Dragons Don’t Regenerate Body Parts
Unlike some lizards, bearded dragons will not re-grow tails, legs, or anything else. So if your bearded dragon has lost his or her tail, it will not regrow.