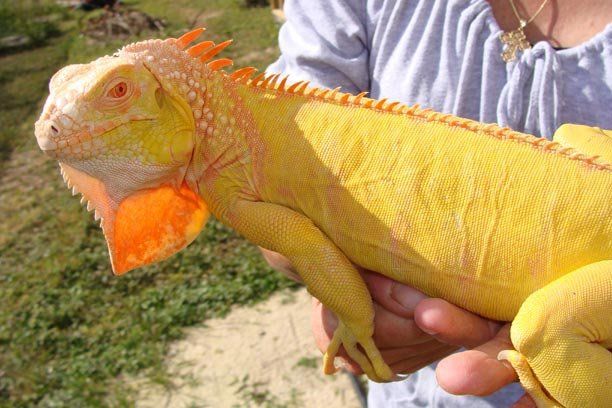 To someone who doesn’t own lizards, keeping iguanas can be a whole new world of information.

One thing to know is that albino iguanas are very much on the market and a potential pet to call your own.

It’s good to be aware of what’s involved in owning an albino iguana before buying, though. Here’s what you need to know.

Iguanas are iconic, cold-blooded creature who can look alien at times. The classic iguana look is a low-slung lizard with saggy skin hanging from its neck.

These diminutive dragons really do mirror beasts of fantasy. Some have rows of spiky protrusions lining their backs, faces, necks, and/or tails.

1. There are two types of albino iguanas. T positive and T negative.

T positive albino iguanas look yellow in color, but can turn orange or develop spots with age. Some turn fully red-orange in color. They have light-colored eyes that can be brown or pink.

T negative albinos look like T positive, having a yellow base color, but also have distinctive pink stripes on their bodies. These are similar to hypomelanistic iguanas, but more vibrantly colored. 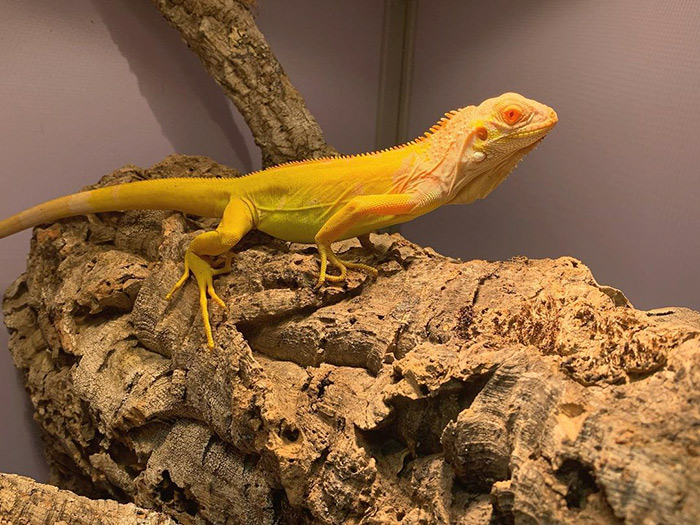 Sometimes science can get involved, though. The legendary CRISPR gene-editing technique was used to modify reptiles for the first time in 2019, creating four albino iguanas.

The purpose of breeding them helps to study eye disorders among other medical research. We can almost guarantee that any albino iguanas you come across for sale were not made this way, though.

Albinism doesn’t affect their size in the long run. The average size of an adult iguana is between four and six feet, including their tail.

Some albino iguanas grow slower than ones without albinism. This doesn’t mean they won’t reach their full adult size eventually, but it will take longer for them than another species.

They will likely be severely sensitive to light, meaning that they have a hard time seeing.

This could be considered as being partially blind, but they can still see enough to lead relatively normal lives. 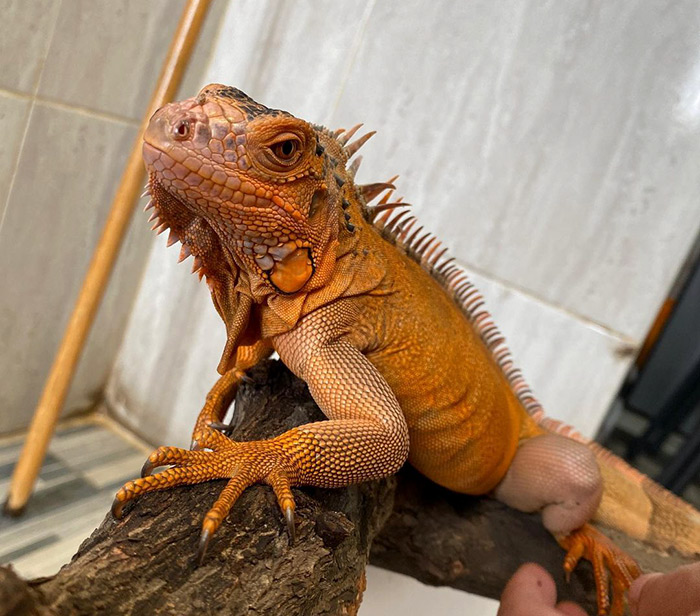 5. General consensus puts an iguana’s lifespan around the 20 year mark.

Specialists are almost certain that these lizards live longer in captivity, thanks to good care. One website claims that a certain species, the Cuban rock iguana, can live a whopping 60 years!

6. Iguanas are skittish creatures that can be hard to tame even with years of ownership. Albino iguanas, however, are considered to be naturally calm creatures.

While they’re still of a manageable size to handle, you’ll find it easier to pick them up than regular iguanas. Otherwise, it comes down to personality. There will be some iguanas who like to be held and have an adventuresome air, other who will evade your grasp and maybe fight back.

7. Already a high maintenance reptile in general, iguanas with albinism can be ever so slightly more so.

Because of an albino iguana’s potential eye problems, you may have to really guide them towards their food or they will not eat.

They may not even know it’s there! This may add a few minutes to feeding time, but it’s hardly a make-or-break factor when considering adopting an albino iguana.

The good news is that feeding iguanas is not expensive. They’re herbivores, so they eat loads of leafy salad.

Even fruit, though it’s not as a good for them as greens. Insects aren’t great for their diet, so you don’t have to worry about live feeding.

8. You can keep an albino iguana the same way you would any other iguana, regardless of their color.

They have the same habitat and dietary needs. The one consideration you should give an albino iguana is more shade to hide from the sun in.

However, balance is key. Too much leaves could confuse the iguana and further confuse it when looking for food.

Living in hot climates allows you to keep them in more places. States like California, Florida, Arizona, and Texas are fine for letting your iguana live outside. It allows them to have all-natural light.

If you need to keep it inside, though, the best enclosure is a screen cage with branches to climb on and leaves for shade … until they grow up. Once they fully mature, you may need to switch to a large tank. 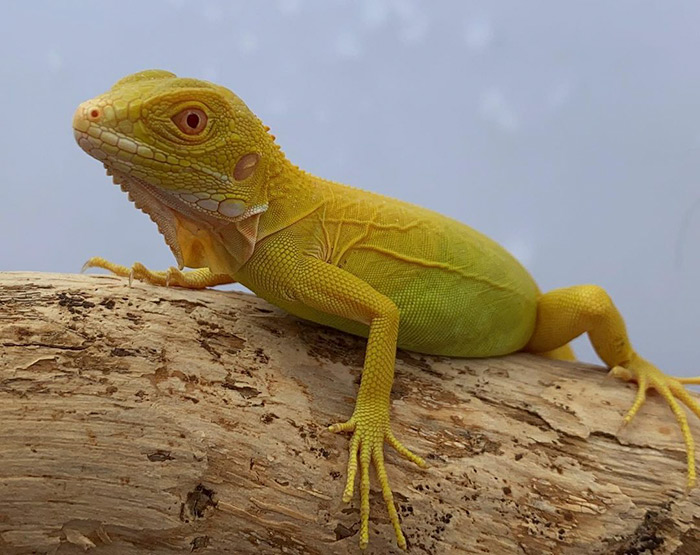 9. Albino iguanas are not particularly rare.

First of all, there are many, many, many different varieties of iguanas. More than you might have thought possible! A fair few of those can be very rare or hard-to-get, more so than albino iguanas.

10. An albino iguana can cost much more than you think.

Keep in mind that’s just the purchase price. It doesn’t include the money you’ll have to spend on its habitat.

11. Albino Iguanas are not the rarest type of iguanas

Black Dragons, also called Saba Island Iguanas (based on where they come from) are – you guessed it – black. They can cost an incredible $1,500 which speaks to the high rarity of the breed.

Perhaps rarer, however, is the marine iguana which only exists on the Galapagos Islands. They are the only marine lizards on Earth. They also aren’t for sale, so you could say they’re priceless.

12. As long as albino iguanas are bred with care, you shouldn’t worry about wanting to own one.

Many people discourage intentional albino breedings, including breeding two albinos together to compound the effects.

As albino iguanas are quite common, though, it’s no bad thing to own one.

Many different species of iguana are chosen based on their incredible color and albino ones are no different.

As long as you’re sensitive to their extra needs, albino iguanas can make great pets.

Reptiles are considerably more difficult pets to own than mammals, so it’s important to be able to commit to their care before buying one.

Because of their price tag, we doubt there’ll be any rash decisions to adopt an albino iguana without seriously meaning to.